Thousands of retail establishments, hotels, restaurants, and other organizations offer discounted rates or promotions for active military personnel and veterans. Given the sacrifices made by the men and women of our Armed Forces, such offers are a way of expressing the collective gratitude of our everyday citizens.

Unfortunately, some criminals will go so far as to create fake military id cards in order to fraudulently obtain discounts or as part of larger scam operations they are engaged in. Stop fake military ID cards in their tracks with the U.S. Identification Manual. 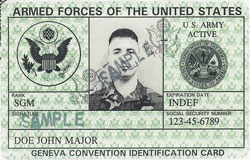 There are a variety of different cards issued to United States military personnel depending on the branch they serve/served in, their current status, and/or their relationship with a military member (i.e. spouses and dependants). The U.S. Identification Manual provides comprehensive details needed to verify all varieties of military ID cards.

Common Access Card (CAC): The CAC is roughly the size of a credit card, and is the standard ID for active duty uniformed service personnel, Selected Reserve, DoD civilian employees, and eligible contractor personnel. There are four classes of Common Access Cards that you should be familiar with: